Just a short one today – The Kitschies. The Kitschies are new awards, established in 2010 with the single Red Tentacle (novel) and subsequently gradually adding the Golden Tentacle (Debut novel), the Inky Tentacle (Cover art) and the Black Tentacle (Judges’ discretion). Important things to know about The Kitschies are that they are presented by Kraken Rum and “reward the year’s most progressive, intelligent and entertaining works that contain elements of the speculative or fantastic.” The mission of the The Kitschies is “encouraging and elevating the tone of the discussion of genre literature in its many forms.” And the most important thing about these are the prizes – £2,000 in prize money and hand-crafted Tentacle trophies!

Here are the stats. I’ve only presented two charts here. The first chart is the gender breakdown of winners with 12 winners across 4 years, and excluding two of the Judges discretion awards at this time – SelfMadeHero (which does have a female publisher) and the World SF Blog. 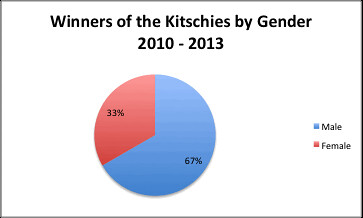 And the gender breakdown of the Red and Golden Tentacles ie the fiction component only. 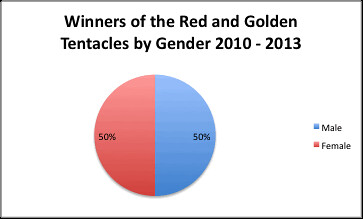