Despite having a bad night again last night, I think I’m progressively starting to feel a bit more like me. Ish. I still have a battery of tests to do, running here there and everywhere for time sensitive stuff, but they’ve started giving me drugs to treat symptoms. And it’s amazing how you realise just how bad you felt when you start to feel not bad and also just how easy it is to forget what feeling human feels like. One of the most important leaps forward was having my Vitamin D trebled by a doc this week. I feel instantly better. I’m sleeping great and I have my energy back. OMG not having energy is like some kind of horrible torture for me.

I’m also my own worst enemy, as my mother loves to say.

The worse I feel, the less likely I am to take action to make myself feel better. Dehydrated? Unlikely to start drinking more water. If I’m lucky, I’ll up the caffeine intake. Have a headache? Why pop a pill when I can just blame the self infliction and thus point to the self deservingness of said pain? Lack in energy and general blahness? Why consume more fruit and veggies and take a vitamin when I could loll listlessly about, nosh nutritionally devoid junk and just groan?

So my gradual improvement this week has also improved my outlook on life (yay) and I’ve started to eat better and take my meds and gotten into the upwards spiral I so often avoid.

And got myself to uni yesterday for the first time. (I mentioned I have an office at home so I don’t really need to be on campus all that much?) I had the energy and mindset to be able to cope with parking (luckily I had already set the parking app up on my phone so I just had to learn to use it) and I found the Humanities building and the postgrad lounge where the workshop I had RSVPed for was held. I’m not convinced I needed the workshop, I couldn’t tell you what I got out of it and to be honest, I find most other people’s thesis topics kinda boring (except for Helen’s other student who was there, obvs, since his is SF creative writing), which is more likely due to my lack of arts qualifications than anything. Also, I’m mostly not here to hang out and waste time. I can see that it’s a really fun campus and there are so many cool things on and even just that I could get involved in in my own dept but at the same time, I have a lot going on in my life right now, I took a big salary hit to be here, and I feel too old for the uni experience this time round. I’ve been there and done that and know how easy it is to lose 6 months or a year of productive study to being a student. And so on the one hand I’m making myself go to all these workshops on how to do a phd, which I didn’t take the last time through, but on the other hand … I mostly know all this stuff – I know that my thesis topic will change over the next four years. I know that at the moment I want to solve the world but most of that will fall away because the point is that you need to focus on one specialised idea and contribute that to your field etc.

Probably the one thing I took away from yesterday is the way a creative production phd is a dance between the creative work and the exegesis, that the two form one thesis together and that you need to work on them simultaneously so that one informs the other. And that that’s pretty cool as a thought exercise. And that it’s really really cool that I get to spend the next three years, like, thinking. I still can’t believe I’m allowed to have fun enjoying my day job. So weird.

This starts out with some feel good, happy carefree plots but be prepared for the sobering finish.

Looking at the gender breakdown of the Aurealis winners and shortlists over time.

Here is the breakdown by gender of the SF novel category for the history of the award: 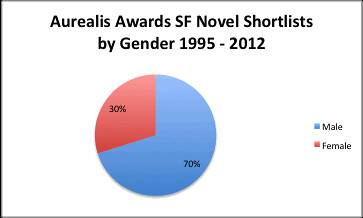 And here is the corresponding breakdown by gender of the SF Novel category winners for the history of the award: 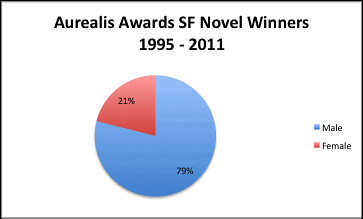 But what of the shortlists? Here is the breakdown by gender for the shortlists for the SF novel category for the history of the award, by year: 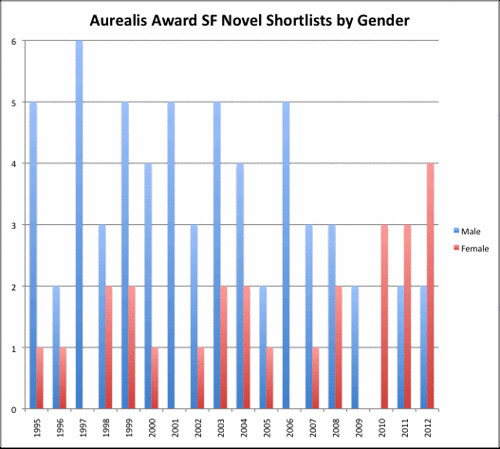 What I feel I still need to chase down here, if the information can be found, is what was eligible for consideration for the shortlists for each of these years to have a look at that gender breakdown.

But here’s some fun facts for this category. Over the course of this category award, there have been 19 wins to 13 individuals: 4 women and 9 men. The 4 women are Marianne de Pierres, Kim Westwood, Maxine McArthur and Kate Orman and they each won this award once. 5 men have won this award more than once: K A Bedford (2), Damien Broderick (3), Sean Williams (2), Sean McMullen (2) and Greg Egan (2 – though he declined the second). 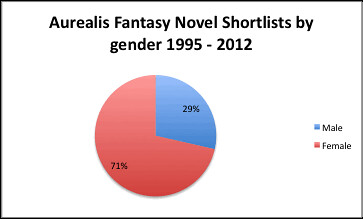 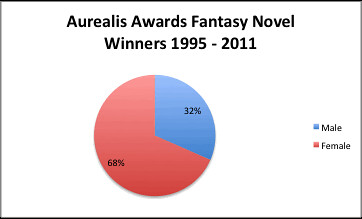 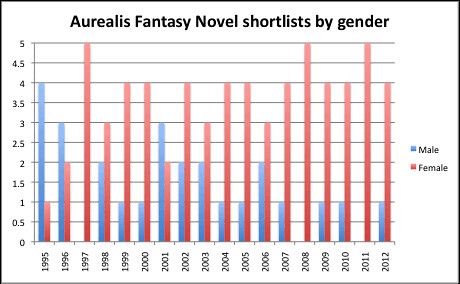 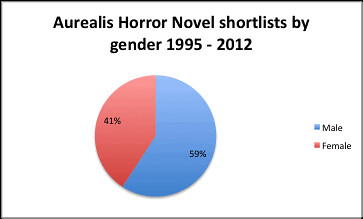 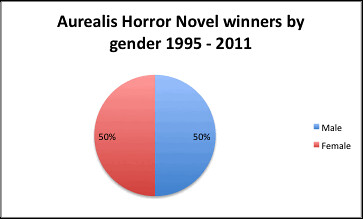 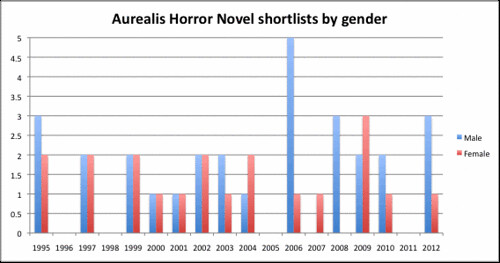 And YA Novel Category: 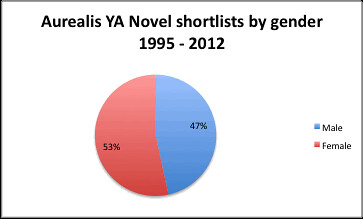 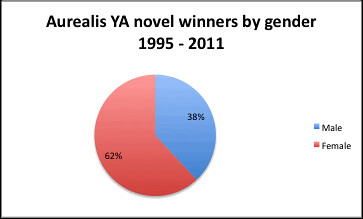 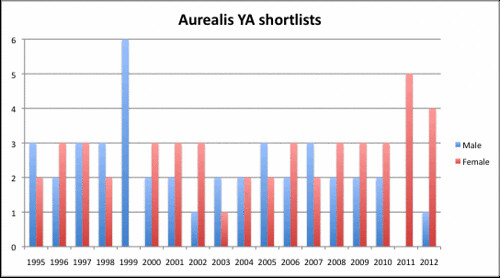 And finally, I thought it would be interesting to compare the above with the Ditmar novel category.

The Ditmars have been running a lot longer than the Aurealis Awards, are a popular vote by the attendees at Natcon and there is only one novel category: 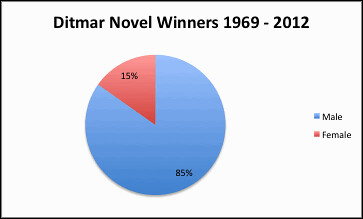 Or more importantly, here is where they sit chronologically: 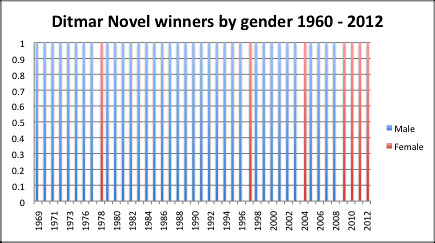 I need to do a proper comparison, but it feels like in most years, the SF novel beats out the Fantasy or YA to win the Ditmar. The other thing of note, is that the fantasy Aurealis category has some strong female novelists who appear multiple years on the shortlists and often have won several. These include Juliet Marillier, Sara Douglass, Glenda Larke, Marianne de Pierres, Isobelle Carmody.

I think these two awards gender breakdowns are interesting to compare to awards I already looked at, namely the lifetime achievement awards: 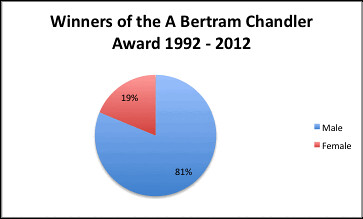 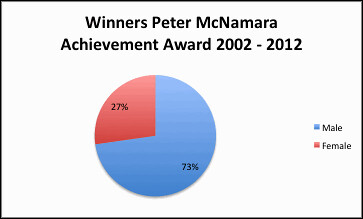 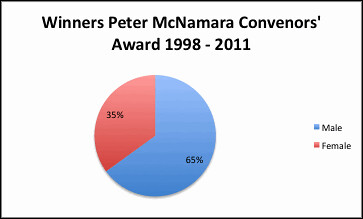 All these awards represent narrowing the winner choice down to one person. The most interesting here is the Peter McNamara Convenors’ award, given the novel category gender breakdowns above.