As well as looking at awards stats, I’m also looking at the publishing stats, to place one in the context of the other. Additionally, I’m going to be looking specifically at some case studies as I move further into my PhD. Likely those won’t be Australian presses but the Australian context is within which Twelfth Planet Press sits.

Today’s data then is for Eidolon and Potato Monkey.

We are committed to promoting the idea of the “pro-fan”; a person who has a love for some aspect of speculative fiction, be it literary, cinematic, game-related or some other facet, and who strives to extend the boundaries of his perception of that passion; a person who seeks to create, to contribute and to objectively discuss.

Eidolon featured fiction, non fiction, interviews, reviews, artwork and letters from their readers. I thoroughly enjoyed getting absorbed in the discussions in the letters and through these discovered the editorial for Issue 12 which addresses concern over the apparent gender bias in their published fiction. Issue 24 (1997) was a Special Women’s Issue. I would have been interested to compare the gender breakdown pre- and post- this issue but Eidolon closed four volumes later, in 2000 with Issue 30. Nine issues had all male fiction ToCs. None occurred after the special issue.

Here is the overall breakdown of the fiction published in Eidolon by gender: 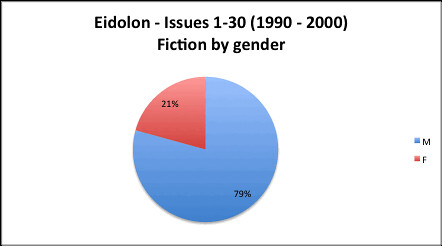 The breakdown of Nonfiction by gender: 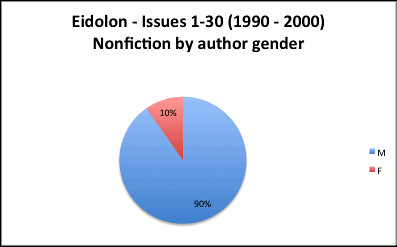 Here I’ve looked at both the reviewers and those they reviewed by gender: 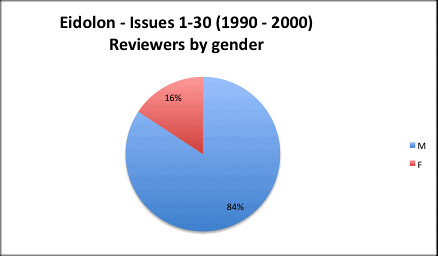 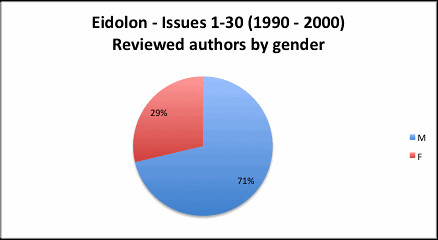 And then done the same for interviewers and those they interviewed: 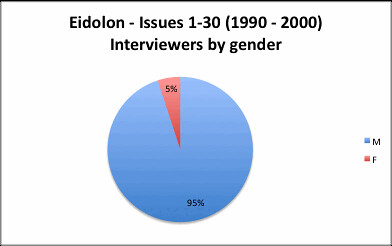 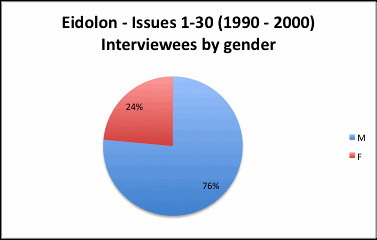 And the artwork broken down by gender of the artists: 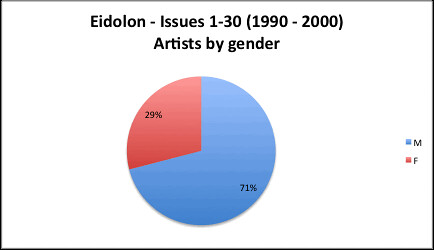 And then finally, the gender of the authors of the letters printed in each issue: 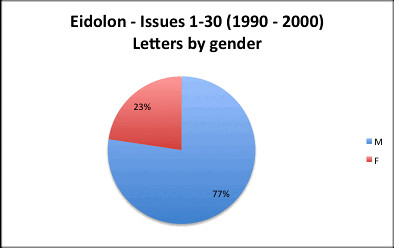 Potato Monkey was edited and published by Ben Payne. It ran for five issues from 2001 to 2007 and featured fiction only. Of the five issues, issue 5 consisted only of fiction written by men. Apart from issue 1, all the cover art was created by women.

This is the breakdown of the fiction in Potato Monkey by gender: 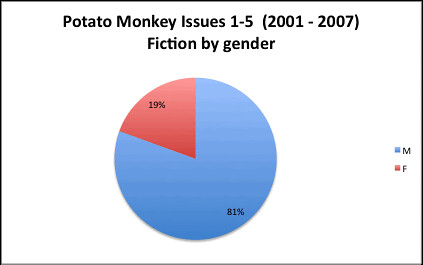