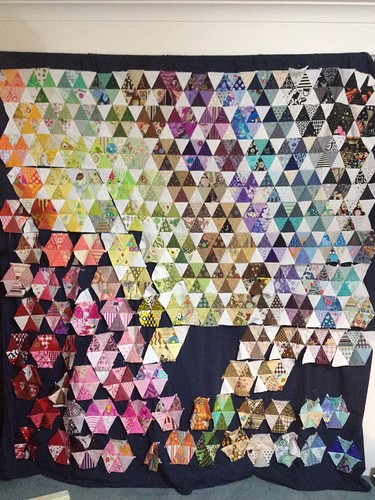 I’m unlearning everything I thought I knew.

I guess somewhere along the line I joined the cult of David Allen’s GTD. And it involves rolling out management systems to increase your productivity across all of your life. The goal is to have a mind like water and in order to do that, you need to feel like you’re on top of all aspects of your life – all the projects you’re working on, the ones you want to be working on at some point in the future and be able to take a step back and see it all at a glance whilst also being able to view your life’s goals and dreams all in the one go.

It’s taken me a while to get all those systems into place but I can see how once they are, and reassessed regularly, how your mind gets calmer and you feel less stressed. Even though, you don’t have any less work to do or are any less busy. You just get to stop thinking thoughts over again, having to remember things or having to figure out what you have to do when or what your priorities are.

One of the techniques I’ve used in the past to remind myself of things I have to do or to get myself to do things is to leave them out in front of my face – piles of paperwork on my desk when I really prefer  clear desks, things out on countertops and tables, craft projects in progress out on chairs and by my bed and all over the place. My thinking was if I put them away, I’ll forget that I was working on them. Or because I prefer clear, clutter free space, I’ll work on or do whatever is in the way so as to get the reward of clear spaces. Thing is? Your mind desensitises itself to the clutter so you get numb to it. But only numb enough so that you don’t notice it at a glance but not so numb that it doesn’t create background white noise stress.

It never occurred to me that there could be another way of keeping track of what I wanted to get done. Or that living in organised, clear spaces would energise and motivate me. I thought that was the goal rather than the means to the end.

Allen says that everything should have a place and that everything should be in its place. And the process of working towards that requires an assessment of just what exactly each and every “everything” is and a decision about what should happen to it – does it need something done? What’s the next action required for it to be done? Do you need it? Is it to be filed? Trashed? Does it need to be found a place. And then you put the next action on your list of actions and you put it somewhere, maybe away, cause you already have a stake in the ground so you no longer need the item itself to trigger a reminder for you. You have a system now.

I always thought that order and organisation and systems ruined/prevented creativity. I’m not really sure why I thought that. Considering I actually really love to feel organised and I thrive better on routine, or rather am a person of habit (just usually bad habits). I suppose I thought that my natural tendency is to want to *create* order through *doing* and that if there was already order, I wouldn’t be motivated to *do*. It never occurred to me that order and feeling organised and on top of things would actually energise and motivate.

It turns out, it feels fantastic to be able to put things out of way and know they aren’t out of sight and won’t be forgotten. A huge relief. A massive weight gone. And I can’t describe how it feels to start to see my house begin to look how I always imagined a grown up person’s house to look.

And the bit about creativity? I don’t think my brain has been so clear and able to work, effectively and productively, in a very very long time. I find myself writing paragraphs for my PhD randomly and with ease. And I’ve been working solidly on the quilt in the picture here.

In May, I took apart the whole quilt top that I’d assembled on this project so far as well as well as all the rest of the hexagons I’d pieced (which was enough for the rest of the quilt top, except I hadn’t decided that yet). It took me nearly a week to unpick all the hand sewing which I’d done over the course of maybe two years. And then I picked a new pattern. The original pattern, you see, didn’t work out – I had wanted to work with more colour play – light, dark and mediums to create a sense of shadows and movement. Except, I’d pieced the hexagons with related materials rather than in true charm square style – randomly – and it just didn’t work. I decided to abandon the original plan and just go with something else.

I pieced all the new hexagons first because I knew that what I needed to do was lay them all out and work out how I wanted to piece them together for the quilt top, rather than do it ad hoc as I went along. As I normally would have done, eager to see “progress” as I worked. But I stuck with it and I really did piece all the hexagons first. And then I got my husband to help me rig up a design wall. My very first design wall. And I’m addicted to it now! The freedom it’s given me to be creative has been amazing. I threw all the hexagons up, in a rainbowish layout. And then I spent a few days rearranging them all til I got the quilt to look balanced. I’ve never done that before. I’ve never worked on the overview as well as the fine scale at the same time, knowing where I was going as I was going. I thought working like that, on craft, would reduce the feeling of creativity – the knowing how it was going to look by the end at the very beginning. I thought it would take all the fun out of it. But actually, it’s given me focus and direction because at each step, I’ve known what the next action was. There’s no need for procrastination because I don’t need to think or improvise what happens next. I don’t need to put it away for a year to think about how I’m going to make it work.

And before the end of August, I’m going to have finished this quilt top. I’ve never worked on a project this way before. I’ve never finished a project this quickly before. And I ended up with colour play in the end after all. Adding the white triangles to create a star around each hexagon has added a sense of movement. The rainbow (a layout I have formally always detested as I felt it was pedestrian) actually gives the unmatched pieces a sense of uniformity and pattern. And the dark and light layout for each hexagon actually gives some shadow affects too.

The process has been really enlightening. Both for how I will approach crafting going forwards but also for much bigger life projects.

And normally, I panic when I am so focussed on one craft because I feel like it means I’m never going to be obsessed with the other one again. My old knitting versus quilting war. And I have a lot of knitting WIP projects there to be done. And also a lot of quilting ones. But now I have a “Craft Projects I Want to Make” list. Which I am still building. And now I have a management system that I am looking forward to trying out, once I’ve finished the Charm Quilt, to see if it will ease my distress over choosing my craft obsession

We shall see! I suspect there will be some serious finishitupitis going on around these parts in the next few months.