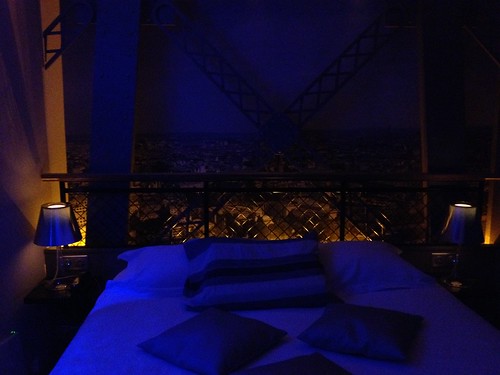 My year started in Paris, and that is a pretty darn fine way to start a year. To back up a smidge, we got married and then stayed around at home a couple of days for Christmas. Some of C’s family had come over for our wedding and were staying for Christmas so we did too. We moved up to the CBD and stayed an extra night or two at a hotel, bumming around the city and generally trying to destress after the excitement of getting married and also you know, process the whole WE GOT MARRIED concept. Christmas lunch was pretty laid back but it was really nice to hang out with our parents and some family and do that all post the whole wedding thing. Jewish tradition has people entertain a married couple for 7 nights after their wedding and welcome them into the community as a couple/family and this felt like a nice nod to that.

And then we headed off to Paris. It was my second trip to this city I love and last time I was there, I’d really wanted to share it with someone, and to be there in love. That’s the cliche after all. I’d read all the stupid bridal mags while planning our wedding, cause again, cliche, and gleaned that the Maldives is where everyone is honeymooning at the moment. I spent a day or two drooling over the beautiful white beaches and blue blue ocean and sky and thought about the lazying about by the pool and hang gliding and then I remembered this was US I was planning a trip for and unless there was wifi by those palm trees, we were gonna be dead bored. I knew I was quitting my day job in 2013 and that this could be the last holiday hurrah for me for some time and I’m not sure when C had last had a proper holiday so … Paris it was! I managed to get a great deal on Singapore Airlines via a travel agent and the flights to Paris were really very pleasant (not so much on the way home but oh well). I sort of had the travel agent plan the trip for us cause I had a lot of other things on. Some things worked great, others not. But she convinced me to book in three different hotels in two different quarters and a decadent couple of nights out of Paris. And I think that was definitely a fab idea I wasn’t sure how it would go moving so many times in about 10 days but it worked out fine. 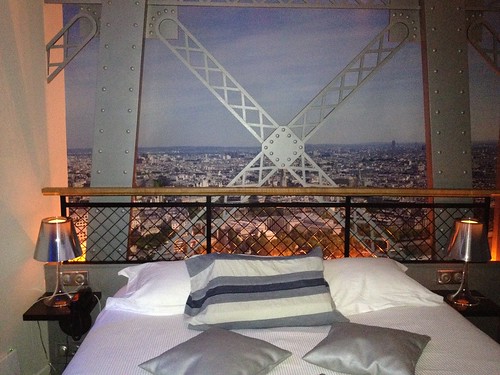 We arrived at about 6.30am on a very dreary morning and headed to our hotel in Montmartre (or thereabouts). This hotel was a lot of fun – Secret de Paris – on a corner of the street and lit up in purple lights, each room was themed to make you feel like you were sleeping in an iconic structure of Paris. It sounds cheesy but it’s French and they pulled it off! We got the Eiffel Tower room (that’s my pillow marring the decor of the room. And the speccy lighting which again, was more atmospheric and less cheesy in real life) and were told we could request to move to any of the other rooms at any time if we wanted to try out a different room. At the time, we were so jetlagged and coming down off the wedding high that we couldn’t be bothered – we did a quick touristing the first morning we arrived and then slept for most of the rest of the day. And after that, we were either sleeping or out and about and packing up to move just seemed like too much effort. Now, I wish we had tried other rooms out, especially cause ours didn’t have a spa bath. Also, a nicely confronting moment after you just got married, our bathroom was encased in glass. So – bedroom, and then the toilet, basin and shower to the side and sectioned off with see through glass. Bit personal. 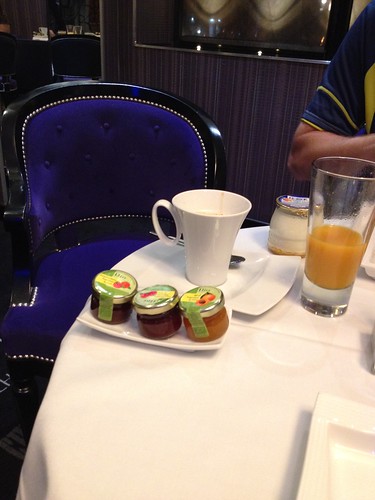 We did a lot of recuperation – a lot of napping, I watched a lot of TV (I watched the entire series of The Closer whilst away, cause I don’t nap!). We also ate a lot of croissants – a delicious bakery was on the corner diagonal to our hotel. I think I might have rushed out there as soon as we’d checked and taken our bags to the room to get an escargot and OMG, baked goods are never as good as they are in France. I’m ruined for croissants now because they just don’t come anywhere close to as delicious. Also the Hot Chocolate – I drank a lot of it cause I had a Crohn’s flare up the whole time trip  (started in the lead up to the wedding in about November and went through into my pregnancy). I dunno how they make hot chocolate in France but OMG it’s fabulous.

Here’s a pic from the breakfast room. Sumptuous chairs, they also had a lot of loveseats so you could sit next to your lover and whisper secrets (of course!) in their ear. We though that was a bit too corny for us!