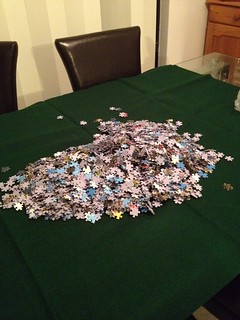 Last year I sat down and wrote a pretty extensive list of resolutions for 2013. It was pretty intensive and would have been pretty gruelling to stick to if I had. Instead, I fell pregnant and got slowed down quite a bit. I left my government job, took up my PhD studies, published a couple of new books, wrote, submitted and passed my PhD candidacy application and had a beautiful baby girl. Basically, life happened. And whilst I’m still going to audit my New Years Resolutions for 2013 (which was really a pretty large to do list) I don’t actually feel too bad about not having ticked off most of that list. I feel like I learned some pretty large lessons this year, the most important being, you can’t control the fact that life happens, all you can control is how you respond to it. So my resolutions for 2014 are going to be a bit different to my usual.

1. Don’t save things for “special occasions”

I used to be one of those kids who saved everything up for special occasions. I had a pretty cool rubber/eraser collection which I never used or enjoyed, I just had them in a jar to take out and look at on occasions. I now think that’s kinda weird. I was also one of those kids who saved the pretty shaped soaps and candles for … I have no idea when cause they ended up all soggy and moldy and had to get thrown out unused in the end.

This year I decided not to do that anymore. My mum told me a great story that my nanna had told her about a young woman she knew once who had put all her beautiful wedding gifts away to be used on special occasions but then died a year or two into her marriage. Her husband remarried quite quickly and that woman used all the first wife’s special crockery and manchester that she’d been saving, and had never gotten to use, for every day. The moral of the story being use it now and enjoy it because life happens. So I’ve pulled out my pretty Kimono tea set that were wedding gifts for every bake club I’ve hosted this year and for whenever someone came over to visit. I’ve even used the teacups for just a peaceful afternoon cuppa or when I’ve overdosed on Downton Abbey. And I’ve felt quite the well to do, I must say. I’ve also used the pretty soap and <whisper> I already ate the chocolates I got for Christmas </whisper> and I don’t regret it at all! Better to be enjoyed now than never enjoyed at all. When will a special occasion be special enough, otherwise?

I’ve spent another year practicing David Allen’s GTD methodology. I’ve had some great runs where it was all working perfectly and I had great productivity and I’ve also fallen off the bandwagon a few times and had to slowly climb back on. I’m currently slowly climbing back on after the baby etc. But in either state, I’ve managed to have things that I’ve been procrastinating on due to bad feelings – like, not getting back to someone fast enough about something and then the longer I leave it the worse it is that I haven’t responded and the worse I feel about it so I leave it to repeat and the bad feeling to grow. Or there is something I know I have to do about something or there’s nine things I have to do and I have to sit down and think about them or something I have to do but I don’t know how and so … I just leave it. Unknown but still to do and sitting there making me feel bad cause I’m not doing it.

Turns out, it’s actually not that horrible just to cop to having been lax on something, apologise and move on. Actually, it makes you feel better. And you can stop avoiding a person or a thing. And most of the time, the thing you’re avoiding actually takes less than 3 minutes to do. And you wonder why you waited 8 months to damn well do it. You could have not been feeling bad all this time if you’d just done it in the first place. I’ve been working on doing that – instead of avoiding the bad feeling, zoning in on it, interrogating and seeing just what it is that I feel bad about. It’s not always obvious and it can take a good while to pinpoint it but much like anything, naming the Big Bad Thing weakens it’s power. And fixing the thing that needs to be fixed is often really not that hard, in the end.

So for 2014, I’m aiming to uncover all the sore points, expose them to the light and rid myself of them. And focus on doing so when I notice the “bad feeling” the first time. Kinda long the GTD lines of write the thought down the first time so you don’t have to keep rethinking or remembering it.

3. Don’t make things harder for myself

Just after I took the picture above – the 3000 piece jigsaw puzzle C gave to me for our one year, paper anniversary – I started sorting through the pile to start working on it. I picked up two pieces that were still together from manufacture and pulled them apart and said to C, “it’s cheating otherwise.” He wandered off and I sifted and sorted through all the pieces looking for edges and bits of yellow and red etc. As I found more pieces still stuck together, I pulled them apart and mixed them up in the pile. After I did it like three or four times, I suddenly wondered what the hell I was doing? I was deliberately making it harder for myself for no discernible reason other than to make it harder for myself. There’s no overseeing body judging my performance at assembling a jigsaw puzzle who will take points off cause 8 pieces were preassembled in the factory. It’s a 3000 piece puzzle, finishing it will be cool whether or not I assembled 3000 pieces or just 2992. And it occurred to me that I do this kind of stuff a lot to myself – for no reason. As a friend said to me the other day, life is hard enough and throwing enough curve balls at you that you don’t have to deliberately make it harder for yourself.

This year I had a few examples of where I did choose to make things easier or better for myself and the sky didn’t fall in. Noone appeared behind me to strip me of my blue ribbons. And no points were deducted.

I’m gonna work on not making things harder for myself a lot more in 2014.

4. Be more compassionate and forgiving and less judgmental

I was very sad to see the passing of Nelson Mandela this year. I feel so despondent about the lack of leadership we have in the world right now. I feel so very sad and depressed about a lot of what’s happening here in Australia with our new government. I feel like the best way to respect the passing of Mandela is to live some of his principles rather than spout hollow soundbytes. So I’m going to do that – concentrate in 2014 on being more compassionate, more forgiving and less judgmental of others.

2014 will be a year of focus on my various projects and I’m hoping to post a lot about all of those as the year progresses.